Are you looking for a processor to build your PC around? Or do you intend to upgrade your current PC’s processor? Which brand should you choose, AMD or Intel? Read on and find out.

Choosing a processor for your PC might be a confusing task with various options presented. Whether you want to upgrade your PC or buy a new one, many things depend upon your choice of processor. Before jumping off into an Intel vs AMD war, let us first see what factors to consider when purchasing one.

If you are thinking of upgrading an older PC, first verify if your chosen processor is compatible with your motherboard, and if you’re buying a new PC, remember to look for a motherboard that will be able to accommodate your processor.

Clock speed (the frequency, measured in ‘cycles per second’) of a CPU is no longer the deciding factor. It is the equivalent of the “RPM” value of a car’s engine and depends on other factors. 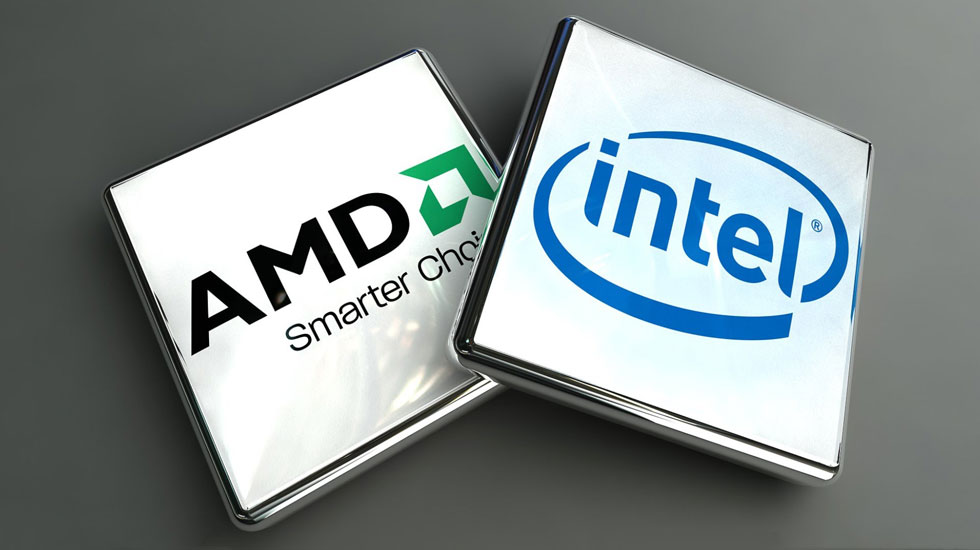 Intel and AMD both make high-quality processors. In fact, at one point, both the companies had chips with not just identical clock speeds, but they also fit the same motherboard sockets. To make an informed decision on which processor to pick, let us know a little about the backgrounds of both the companies.

AMD’s first processor was a reverse-engineered version of the Intel 8080, called the AMD 9080, made possible by taking a picture of Intel’s processor die and examining it. Later on, agreements progressed and Intel had AMD manufacture Intel-based processors as a backup in case something was to happen to the main Intel, which gave reassurance to their customers.

As part of this agreement, Intel licensed the x86 architecture to AMD in 1976, letting them manufacture IBM compatible processors to date. This changed as Intel ended AMD’s license, forcing them to make their own processors. AMD then launched the K5 and K6 in 1996 and 1997, bringing them to the forefront of the processor battle.

AMD then launched the K5 and K6 in 1996 and 1997, bringing them to the forefront of the processor battle. Along with processors, they started their business in the gaming industry as well by introducing graphics chipsets and all.

Pentium 3 was the first to introduce a feature that lowers clock speed when the system is not in used and called it SpeedStep, and the first to break the 1GHz barrier.Later on, with the Pentium 4 processor, Intel procured proprietary rights for yet another novel feature called

Later on, with the Pentium 4 processor, Intel procured proprietary rights for yet another novel feature called HyperThreading, which is an intelligent scheduling system for distributing workloads onto the CPU. Check out the evolution of Intel Processors in below table in brief.

Over the years, Intel has modified the processor to make it faster, efficient and reliable. Reduction in size of transistors also reduced the size of processors.

The Real Battle: Intel vs AMD, What Should You Buy?

Despite the availability of numerous models from both companies, AMD chips cost lower than their Intel counterparts do. AMD’s A-series processors, Sempron and Athlon start at $30, while Intel’s lowest processor costs $45. However, the Intel chips are at a higher performance per dollar in most cases. The primary exception to this is the quad-core chips. Intel’s i5 quad core CPU costs $180 while AMD’s A6-5400K costs $45, which would be preferable if you wish to use applications that rely on multiple cores. AMD chips also have better-integrated graphics, so if you want to play a game like League of Legends, AMD may be a better choice.

However, beyond the entry-level processors, the price value of AMD and Intel processors are about the same and despite the quad-core affordability of AMD, Intel processors can generally outperform these chips due to hyperthreading.

If money is not a limiting factor for you, Intel is definitely the wiser choice. Their microprocessors not only have better benchmarks but also draw lower heat, resulting in lower thermal design point ratings. AMD’s chips essentially have as many cores as possible stuffed into them, with little regard for heat dissipation. To compensate, you would have to purchase a cooling solution or fan to avoid overheating. A consequence of this is AMD’s FX 9590, with speeds of 4.7GHz (or 5GHz with “AMD Overdrive”) and eight cores, twice the amount of cores on the Core i7-6700K by Intel lost in benchmark tests conducted by CPUBoss.

One important consideration into all this is your use of the processor. If you want to play current generation games like Shadows of Mordor, Metal Gear Solid V: The Phantom Pain or The Witcher 3, don’t rely on the integrated graphics provided by either manufacturer. For games like these, you’d want to purchase a GPU (graphics processing unit) or perhaps multiple GPUs depending on the type of the GPU and the game graphics and settings you want. On this note, if you want to pair your GPU with a CPU, you’re better off choosing an Intel processor.

Some of the advantages of better-integrated graphics outside gaming are in video encoding and rendering, making up for some of AMD’s shortcomings in other aspects. The A10-7870K can encode video faster than a Core i3 of approximately the same price. This is also useful when a discrete video card installation does not seem pragmatic.

Overclocking is tweaking your CPU to get a higher clock speed and hence better performance than the limit suggested by the manufacturer. It can work well if done by skilled and experienced hands. Some CPUs can handle overclocking better than others can. For mid-range processors, this is one area where AMD CPUs are definitively better. AMD processors offer to overclock as a feature from low-cost ones at about $45, beginning with the A-Series APUs (Accelerated Processing Unit – a hybrid of a CPU and a GPU). Intel’s version of this is only one CPU – the Pentium G32458, at $70 that overclocks from 3.2GHz to 4.5GHz.

Overall, if you have a budget, you might want to check out AMD processors, as they have more cores and better-integrated graphics which will work for low-end gaming or multiple processes simultaneously. Intel chips, on the other hand, consume less power, are quieter, and with hyperthreading, match the multitasking abilities of AMD CPUs in spite of a clear difference in the number of cores.

To put it bluntly, Intel CPUs are usually of a higher grade than AMD CPUs. However, in certain cases, and depending on certain usages, AMD may take the spotlight. Intel vs AMD is a never-ending battle and both the companies fight toe-to-toe for the best spot.

If you still have a preference or a general affinity towards AMD, hold hope! The Zen architecture came into the picture a little while back with benchmark tests showing greater performance than Intel’s 6th generation i7 processors, and so far, it seems capable of turning the tables.

Intel is also doing its best with its seventh generation of processors (also called Kaby Lake) which appears to encompass desktops, laptops, servers and even tablets and smartphones.

2 responses to “AMD vs Intel: Who Makes Better Processors?”